You are here: Home / Blog / Innovation / The Genius Within

Recognized geniuses may be rare, but genius resides within all of us. There’s no such thing as “luck” or “accident” in this cosmos; and not only is everything connected to everything else, no one is excluded from the universe – we’re all members. Consciousness, like physicality, is a universal

quality; because genius is a characteristic of consciousness, genius is also universal. It follows that that which is universal is available to each and every person.

The process of creativity and genius are inherent in human consciousness. Just as every human has within himself the same essence of consciousness, so is genius a potential that resides within everyone – it simply waits for the right circumstance to express itself. Each of us has had moments of genius in our lifetimes, perhaps only known to ourselves or to those close to us. We suddenly make a brilliant move or decision, or say exactly the right thing at the right moment, without quite knowing why. Sometimes we might even like to congratulate ourselves for these fortuitous events, but in truth we really don’t know where they came from.

Genius is often expressed through a change of perception – a modifying of context or paradigm. The mind struggles with an unsolvable problem, poses a question, and is open to receive an answer. The source that this answer comes from has been given many names, varying from culture to culture and time to time; in the arts of Western civilization, it’s traditionally been identified with the Greek goddesses of inspiration called the Muses. Those who are humble and grateful for illumination received tend to continue to have the capacity to access genius; those who credit the inspiration to their own ego soon lose this capacity or are destroyed by success. High power, like high voltage, must be handled with respect.

Genius and creativity, then, are subjectively experienced as a witnessing; it’s a phenomenon that bypasses the individual self or ego. The capacity to finesse genius can be learned – though often only through painful surrender – when the phoenix of genius arises out of the ashes of despair after a fruitless struggle with the unsolvable. Out of defeat comes victory; out of failure, success; and out of humbling, true self-esteem.

One of the problems in attempting to understand genius is that it takes near-genius to recognize it. The world frequently fails to identify genius altogether; society often gives acclaim to its work without noting the intrinsic genius of its creation itself. Until one acknowledges the intrinsic genius within oneself, one will have great difficulty recognizing it in others – we can only acknowledge without what we realize within. For example, Mikhail Gorbachev was the subject of enormous worldwide attention, but at the same time, the world never really did acknowledge his genius: Single-handedly, and in only a few short years, he completely revolutionized one of the greatest empires on Earth, and his only sources of power were his inspiration and vision. (Had the communist regime been based on power, nothing could have overturned it; because it was based on force, it was destined to come to an end under the hand of a charismatic leader who was aligned with power.)

Genius is one of the greatest untapped resources of our society. It’s no more specific than it is personal – people of genius frequently have multiple talents in different realms, and they might have answers to a diversity of problems. Yet society suffers a great loss because it doesn’t know how to nurture its geniuses, and in fact is often either indifferent or hostile to them. This is unfortunate, for they characteristically don’t cost much to maintain. The lifestyle of those we term genius is typically simple, and they’re seldom interested in money or fame. Genius is characterized by an appreciation for resources and the economy of integrity, because the genius values life and sees the intrinsic worth of all of its expressions. Since time and resources are considered precious, doing more than is necessary is viewed as a waste; therefore, people of genius often lead very quiet lives and usually only come forth, very reluctantly, when there’s a cause that must be supported. 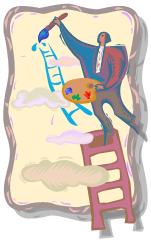 Because they are in touch with an endless source of supply, geniuses experience only a minimum of want (such simplicity seems a common characteristic of true success in general) – for there’s no need to “get” when you already “have”. The basis of this nonmateriality, this seeming naïveté, is a radical understanding of the nature of the universe itself: That which supports life is supported by life; survival is thus effortless, and giving and receiving are one and the same.

Genius is notoriously interpreted as unconventionality or eccentricity. It’s true that such people, due to their alignment with high-energy attractors, have a different perspective on life; therefore, things have a different significance for them than they do for the average person. The genius is frequently inspired to intense activity by insights beyond our understanding.

Genius isn’t stardom – those who attain prominence are a very small minority. There remains a legion of geniuses who achieve no such status; many appear in no way noteworthy and may, in fact, have never had formal higher education. What characterizes this type is the capacity to exhaustively utilize what experience they have, and to capitalize on it by the dedication necessary to reach a high degree of mastery. Many productive geniuses aren’t recognized until years after they’ve died. In fact, the gift – or curse – of genius often brings about unfortunate consequences during such an individual’s lifetime.

One characteristic of genius is the capacity for great intensity, which is often expressed in a cyclic fashion. That is, the personality of the genius sometimes seems to incorporate polar extremes: When inspired, he may work 20 hours a day to realize a solution while it’s still fresh in his mind; these periods of intense activity tend to be interspersed with intervals of apparent stasis that are actually times of fermentation, which is a necessary part of the creative process. Geniuses understand the need to make space for ideas to crystallize, for creativity occurs under appropriate inner, not outer, circumstances. The stage is often set by complete distraction – we all know stories of people who have gotten the answers to complex problems while sitting in traffic on the freeway.

A primary reason that so many people fail to recognize, and therefore empower, their own genius is because in the popular mind, genius is confused with a high IQ. This is a gross misunderstanding, which has arisen from the fact that many celebrated geniuses in the fields of mathematics and physics indeed have high IQs; however, in those fields, the IQ necessary to comprehend the work is a prerequisite. It would be more helpful to see genius as simply an extraordinarily high degree of insight in a given area of human activity. After all, there are droves of noncerebral geniuses in many fields – such as art, music, design, and invention – whose innovative, creative talents fall within certain limited

Keep in mind that IQ is merely a measure of academic capacity for logically comprehending symbols and words. From our studies, it appears that the alignment of one’s goals and values with high-energy attractors is more closely associated with genius than anything else. Genius can be more accurately identified by perseverance, courage, concentration, enormous drive, and absolute integrity – talent alone is certainly not enough. Dedication of an unusual degree is required to achieve mastery, and in the simplest definition, one could say that genius is the capacity for an extraordinary degree of mastery in one’s calling. A formula followed by all geniuses, prominent or not, is: Do what you like to do best, and do it to the very best of your ability.

The following excerpt was taken from Power vs. Force, by David Hawkins, M.D. Ph.D. (Hay House). David R. Hawkins, M.D., Ph.D., is an internationally renowned psychiatrist, consciousness researcher, spiritual lecturer, and mystic. Author of more than eight books, including the bestseller Power vs. Force, Dr. Hawkins’s work has been translated into more than 17 languages. Website: www.veritaspub.com. It is available at amazon.com or directly through Hay House at http://www.hayhouse.com/power-vs-force-5 and all bookstores. Dr. Hawkins also has a new book, Letting Go: The Pathway of Surrender.

Permission is needed from Lighthouse Consulting Services, LLC to reproduce any portion provided in this article. © 2014

To order the books, Cracking the Personality Code and Cracking the Business Code, please go to www.lighthouseconsulting.com.

WAKE UP!
Scroll to top